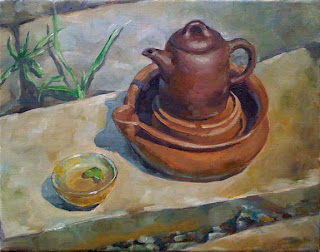 oil on canvas 11*14
Qin Quan teapot is imitating the shape and the weights used in Qin Dynasty. During Qin Dynasty,Qin Quan is the unified the right to cast of iron weighing. The first emperor "Qin Shi Huang " standarized weighing Measurement. Now, in China only has two remaining.
Qin Quan has three meanings:
1, the Qin money, "Qin Shi Huang unified the currency symbol;
2, the right to known weights. Qin official approval of the right to a standard weight;
3, the teapot - power, steady and cautious feeling.
Posted by Lisa Liao at 10:41 PM